My First Gandbaby is Born!

We have been patiently anxiously for this little peanut to arrive, and last night he finally did! Our oldest son and his wife have blessed us all with a darling baby boy! He was 40 weeks 6 days gestation. That's 1 week overdue for those who didn't know :) Carrie was induced Wednesday morning at 08:30 and did not progress well, only getting as far as 4 cm dilation by 10:00pm, and her epidural did not work... she was getting pretty worn out after many hours of contractions 2-5 minutes apart. So, she had baby by c-section! Both mom and baby are doing well :) 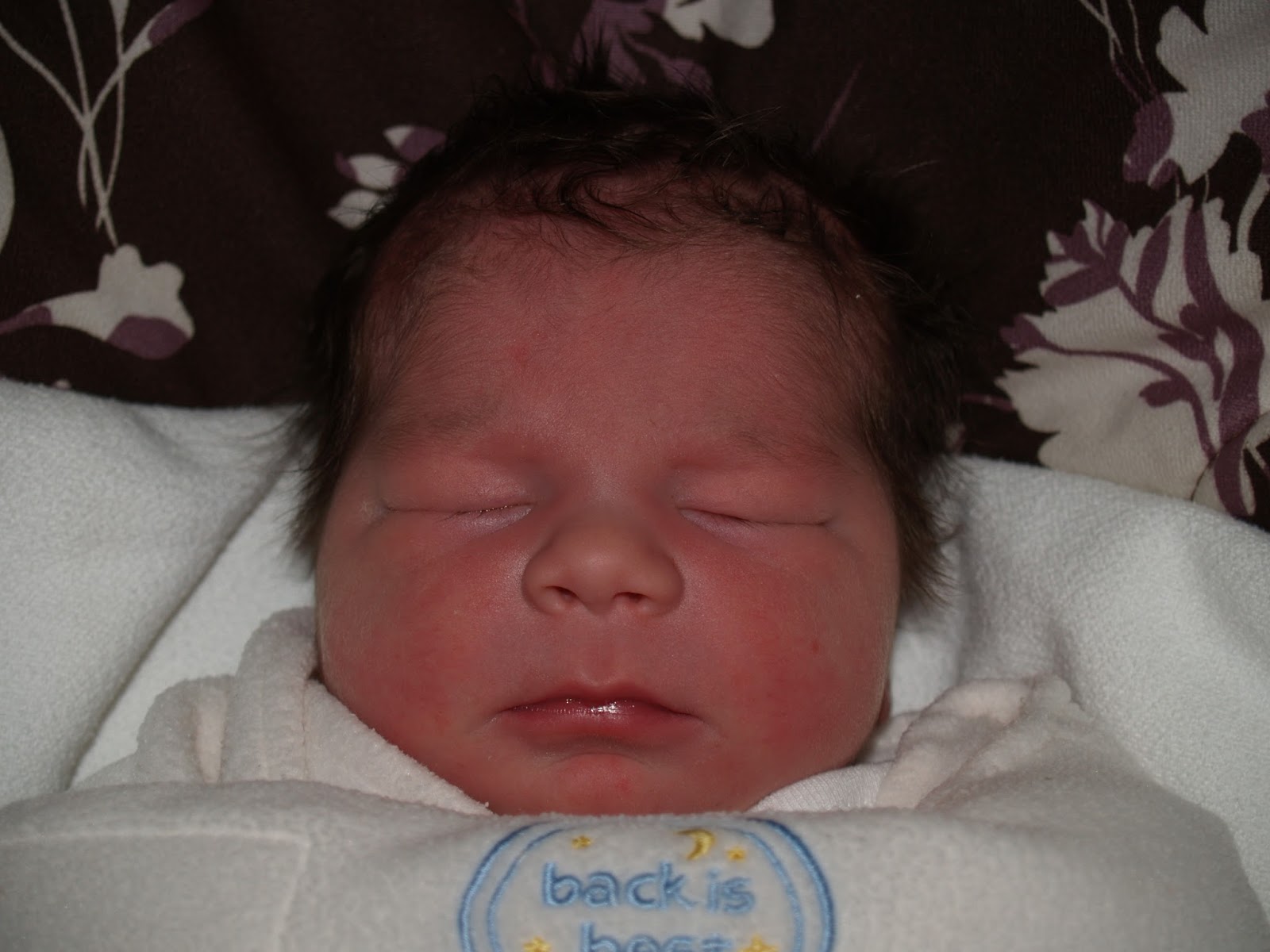 Here he is! Look at that hair! It is kind of curly and dark brown with maybe a little red tinge to it. Believe it or not, his father had more hair! 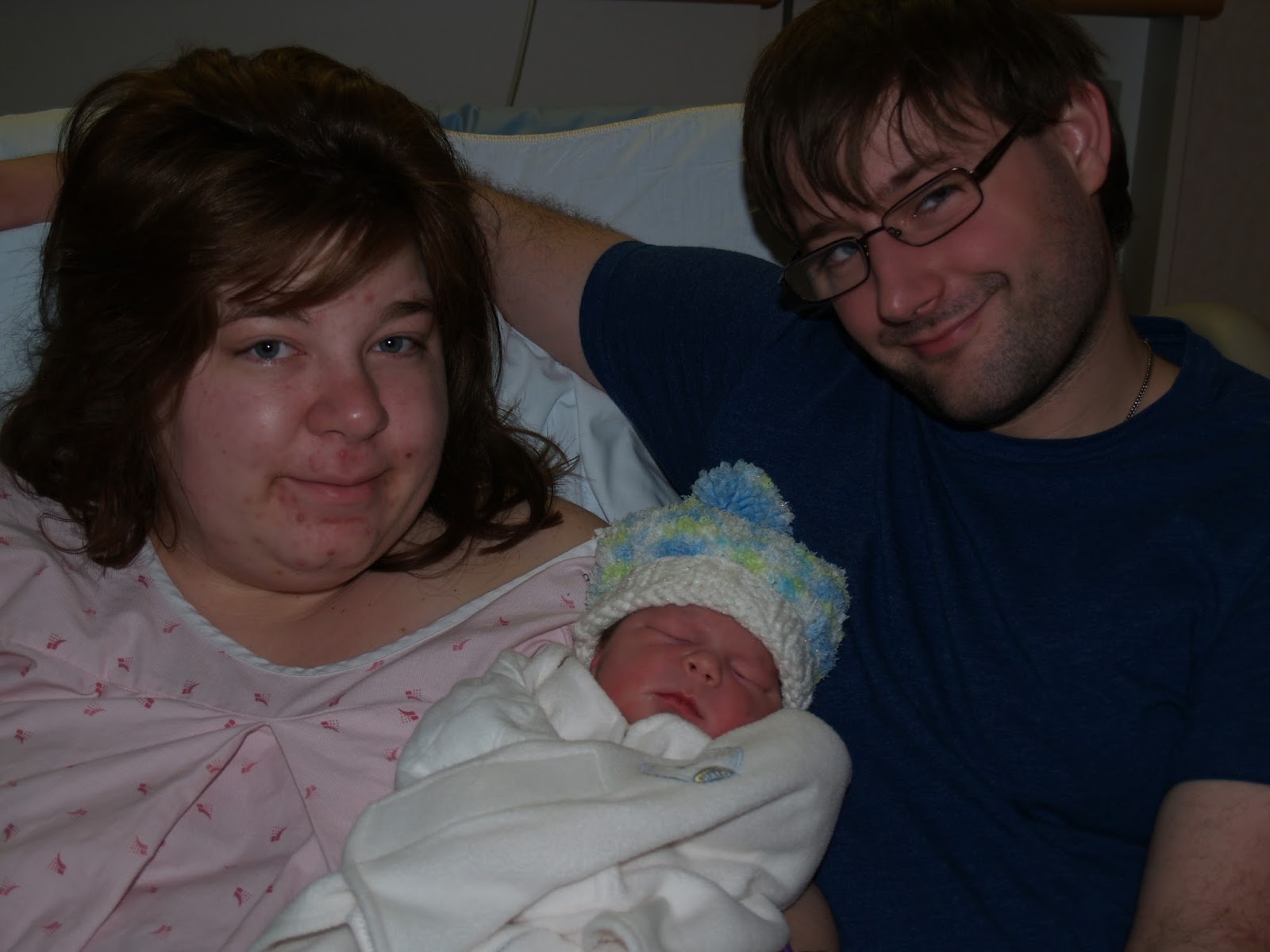 Carrie will probably want to kill me for posting this picture seeing as I had to almost beg to get her to let me take this picture! She felt like she really needed a shower and to fix her hair first. That was not going to be happening for a while yet, but I think she looks beautiful! David is a big gooey mess over his new baby, but he is so darn cute, how could he not be :) 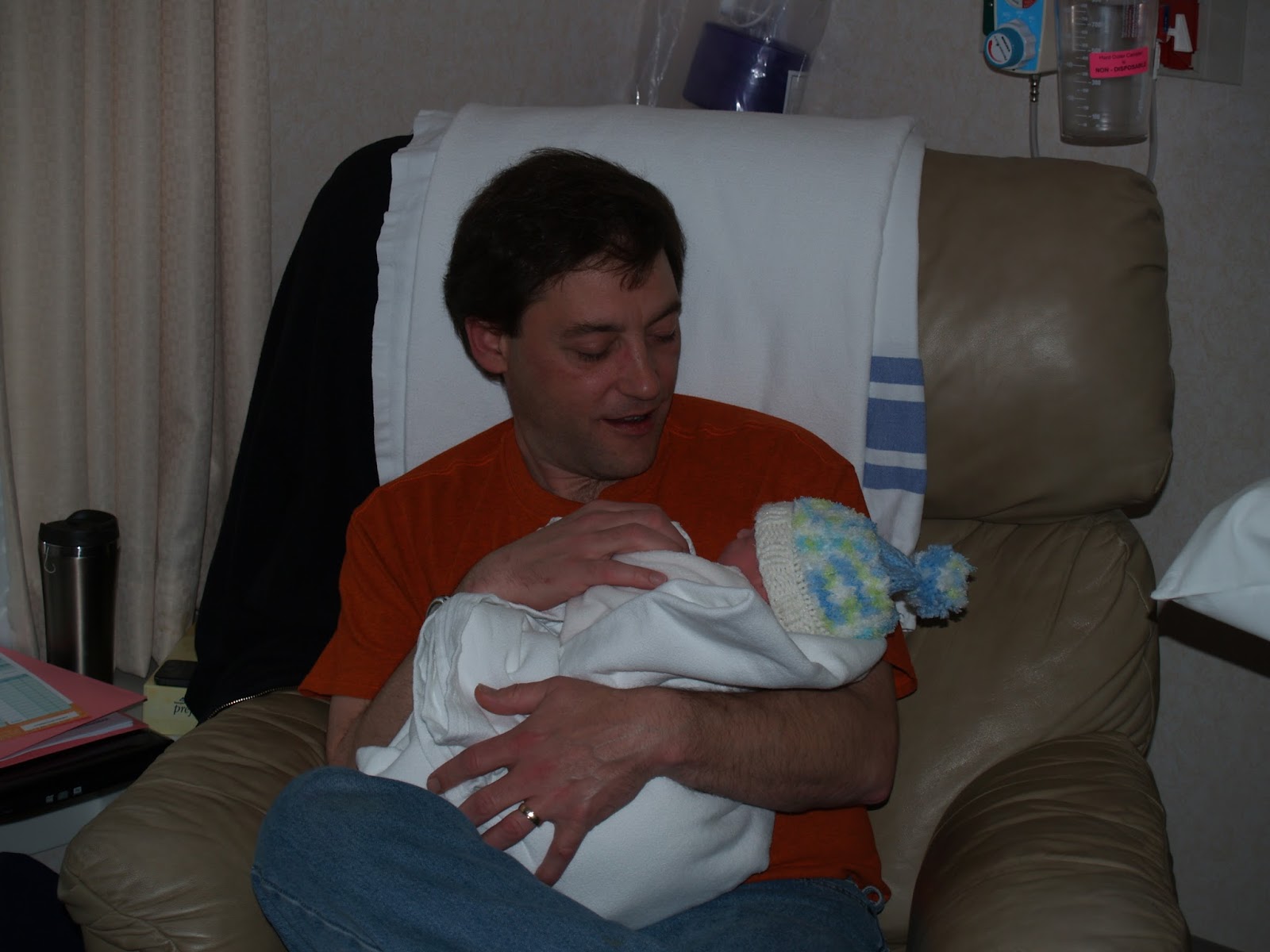 Grandpa Jamie loves babies so much already, it is fantastic to watch him cuddle and coo over his first grandbaby! I almost didn't get a turn to hold him! 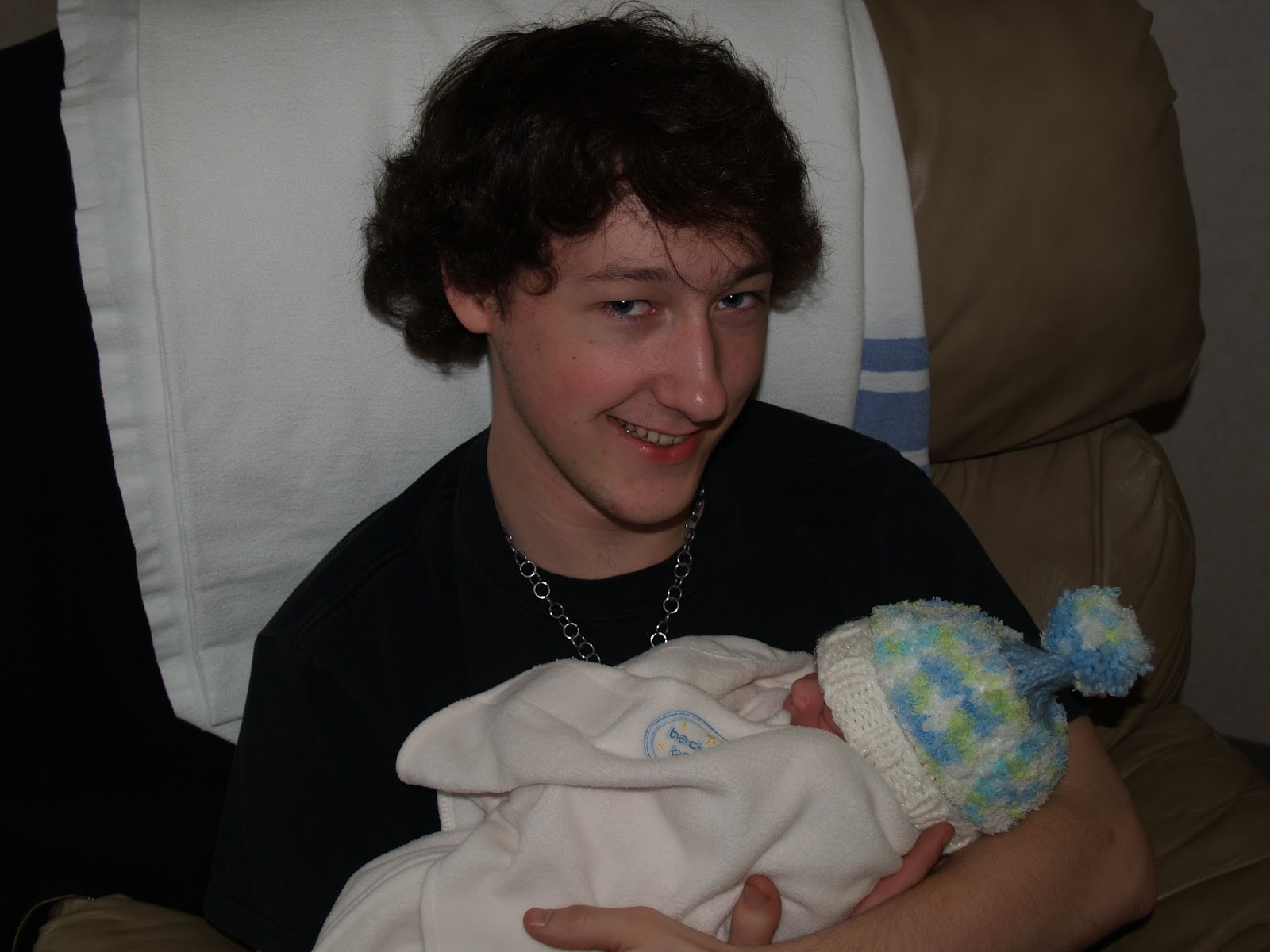 Uncle Geoffrey getting to hold Cameron. Geoffrey has held some of his little cousins, but not much! He will have to learn all kinds of baby stuff now :) 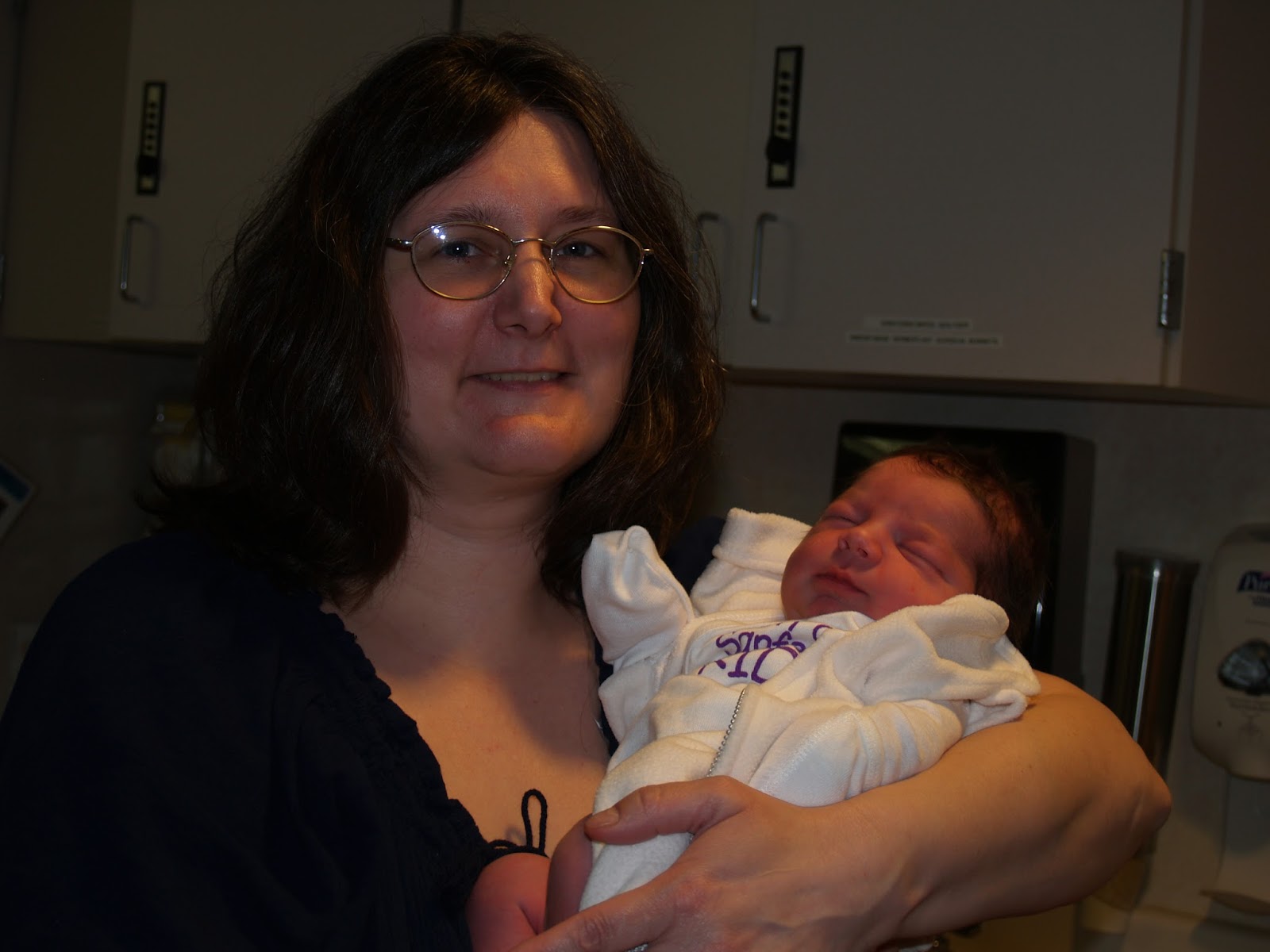 I finally got a turn, and thought I might like a picture of me holding the little peanut someday, so here it is. I unwrapped him and was trying to wake him up so momma could feed him. It had been about 6 hours since he had breastfed last and momma was getting worried. Already a great mom! 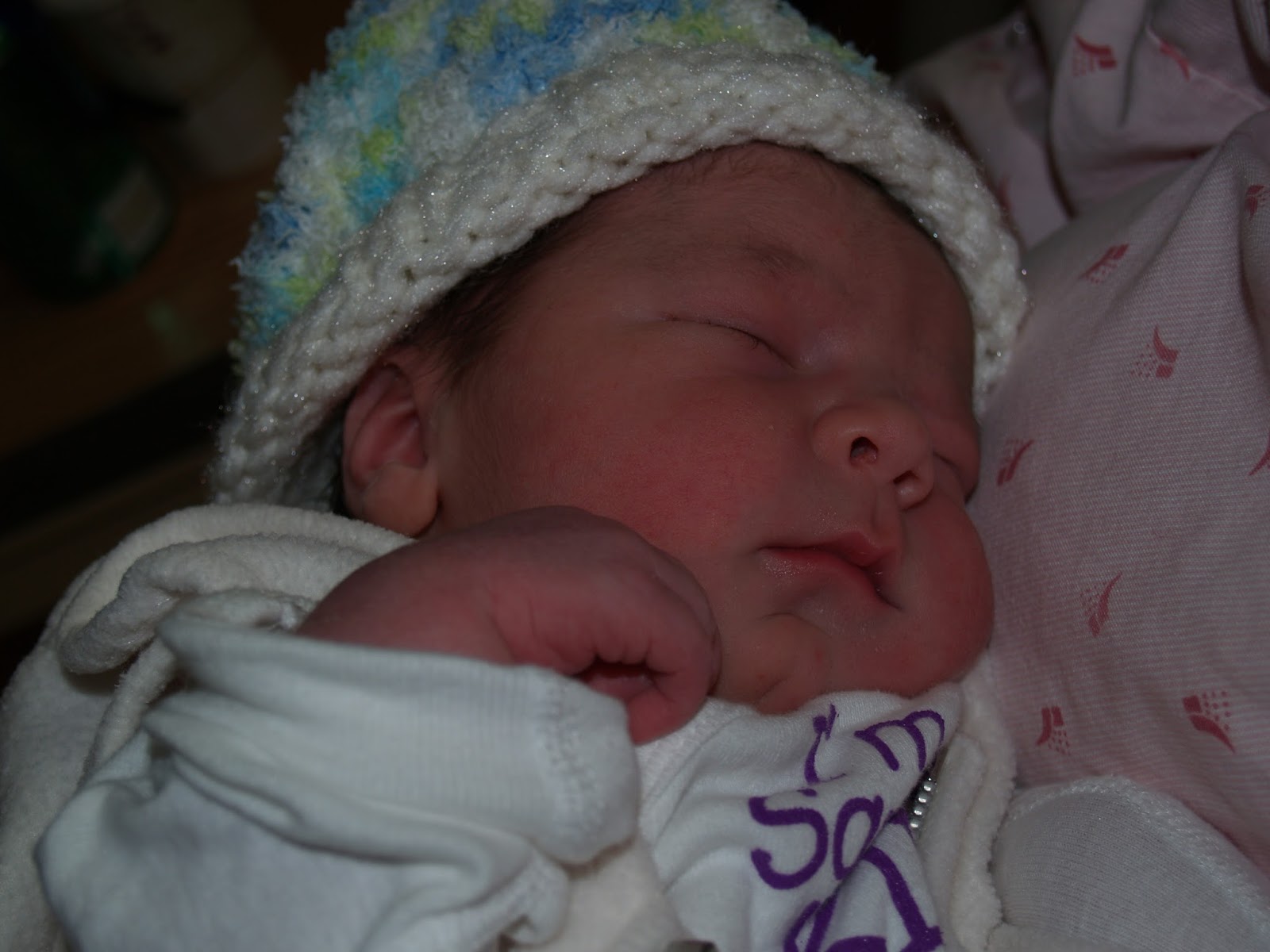 At 4 months gestation, the ultrasound had shown that baby was a girl, so momma had gotten all kinds of baby girl stuff, and baby girl type gifts and hand-me-downs were gathered and given. Momma had dreams of the things she would do with a little girl. Then last week, they did another ultrasound and found evidence of baby being a boy! Momma had to mourn the dream of her baby girl and think about getting baby boy clothes, blankets, etc for this little fella! It was probably a good thing she had a week to get used to the idea of a little boy :) This is the second time in the last 6 years in our immediate family that this has happened! My husband's brother Jeff and his wife Heidi thought they were having a girl, right up until they delivered little baby boy Caden! Surprise!

I am sure you will be seeing more of this handsome little man in the future :)
Posted by Tanya Boser at 3:00 PM

Email ThisBlogThis!Share to TwitterShare to FacebookShare to Pinterest
Labels: family

Congratlulations to you and your family. Healthy is all that matters in the end, right?!

Congratulations to all of you! I think Carrie looks great. She went through a lot and she is probably relieved the baby has arrived safe and healthy. Enjoy being a grandma! 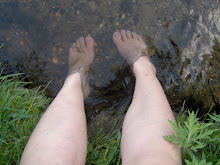 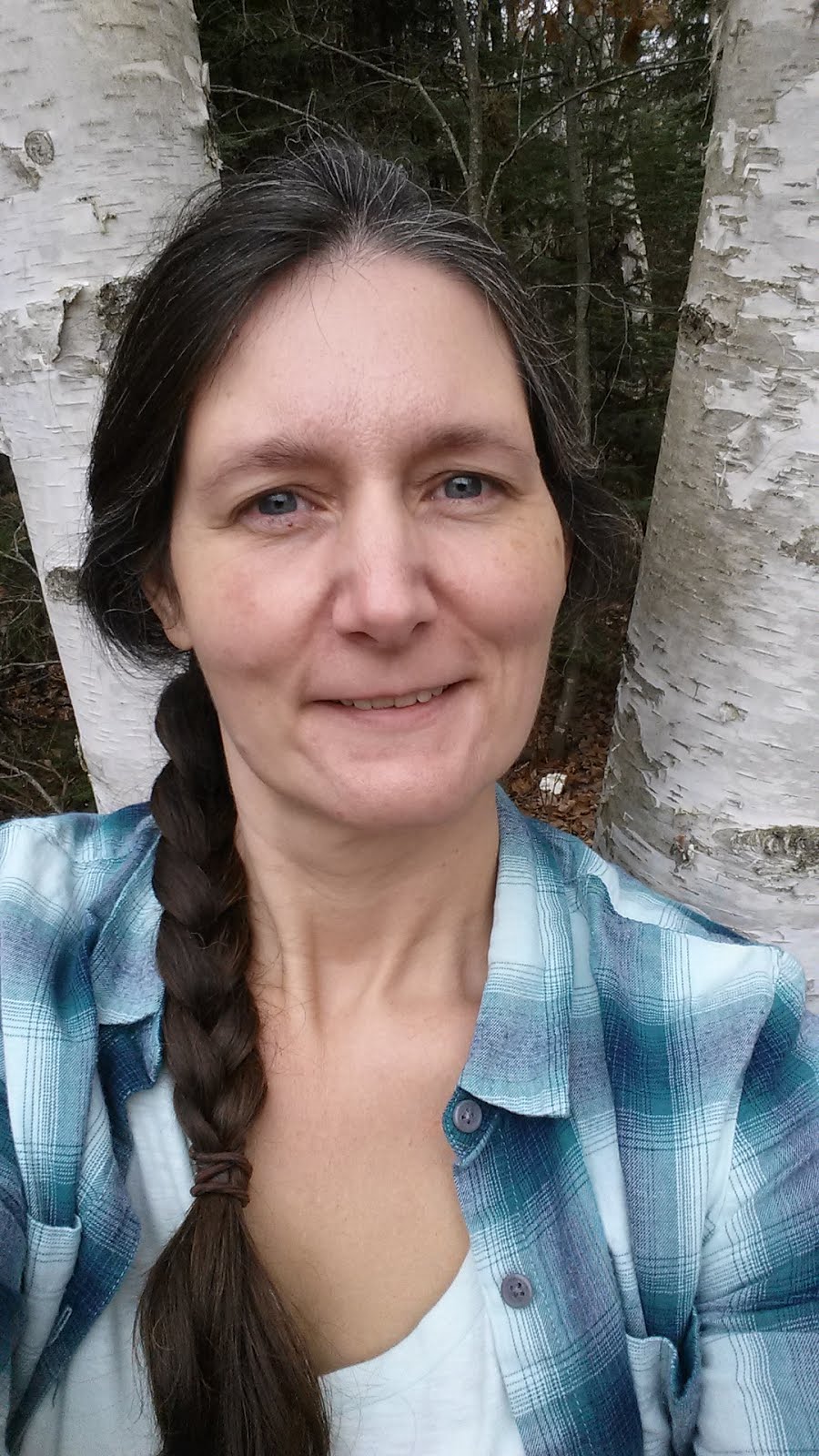 I am a papercrafter and blogger in northern Minnesota, and an ED nurse in a local hospital. I have been married to the love of my life for over 25 years, have 4 grown children, and 6 grandkids (4 arrived all at once with the marriage of one of my kids!) who you may see on this blog now and again :)
Papercrafting is my relaxation, and I hope to inspire you to create your own. Or at least get a chuckle out of you! 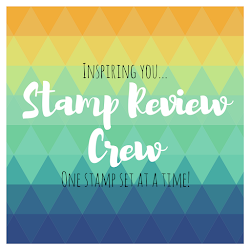 This blog and its content is my sole responsibility and the use of and content of the classes, services, or products offered on this site is not endorsed by any other entity. Images used on the products are copyrighted by the companies that produce those stamps.